Our good friend Howard Levine of Alliance Graphics in Berkeley, California has written an obituary for our friend Mohamed Dadabhoy who died recently. Our hearts go out to our friends, Mohamed’s brothers of USA Bayside, and to his many friends in the business, and to his family and friends at home. Mohamed was always an oasis of positive energy and good nature in the hectic world of trade shows. Ask anyone about him and they only can think of him the same way,  calm and good-natured, no matter what the circumstances. To anyone that knew him, Mohammed’s ever present smile will never be forgotten, and it will be sorely missed.

Our industry – and the world – lost one of its really outstanding people when Mohamed Dadabhoy – co-owner of AST Sportswear – passed away on January 14. He died of a heart attack at the very young age of 62, way too soon. Mohamed was warm, he was friendly, and he was generous. He liked everybody and everybody liked him. He was always ready to lend a helping hand.

He leaves behind a wife, two sons and wonderful memories too many to count.

For the past 25 years one of the highlights of my attendance at trade shows was dinner with the AST team. I knew that no matter where we’d be having dinner that salmon would be on the menu. Mohamed only would eat salmon at these dinners so his three brothers and everyone at AST always made sure that Mohamed got what he wanted. And because they had so much love and respect for him they did it joyously. Those of us who were lucky enough to join them for dinner were likewise so glad to see how much everyone enjoyed indulging Mohamed who gave so much to everyone else the rest of the time.

It will be too strange – and so hard – to be at a tradeshow without Mohamed. If you got anywhere near the AST Sportswear booth at a tradeshow, chances were good that you got drawn in by Mohamed’s winning smile and gentle manner. He would show you their products and tell you their story.

It was 26 years ago, a time when other apparel manufacturers were closing their U.S. plants and fleeing the United States in search of cheaper production costs – read workers – that Mohamed, Abdul, Omar and Ali, these four immigrant brothers, challenged that trend and launched AST Sportswear. From cotton, to dyeing to sewing, they would make their shirts in the United States, using made in America materials and by American workers. It truly is a family company and one which reflects the values that each of these brothers’ embody, led by Mohamed the oldest:  integrity, compassion and quality.

Alliance Graphics entered into our partnership with AST almost from the day they opened their door and it’s been the best decision we ever made. We’ve watched them build their business from a small storefront to a major industry brand. These brothers are the kind of people you not only want to do business with, but to be friends with as well. I’m so proud to call each of them my friend.

Mohamed, you’ve made a difference in this world and you will be missed. And whenever we’re at tradeshow dinners again, I promise that salmon will be on the menu. 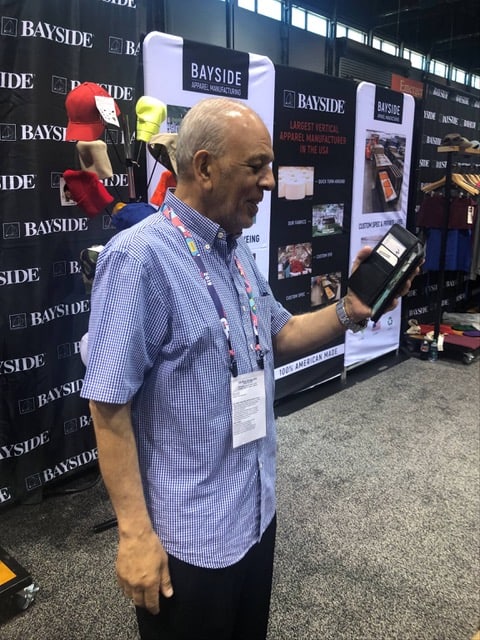