Art feeds the soul and is our connection point and even our purpose. Art heals us. I have made a career out of being artistic. In some aspects, the landscape is changing for commercial art with new Ai technology. Ai generators may forever shift the fine art landscape as well. I spent a month in a rabbit hole of AI generators discovering all the different platforms, or as many as I could find. I even paid for some, which can quickly become a constraint.

At this point, I like MidJourney the most. It may be more challenging to acclimate to just in comparison to simple text fields like DALL-E, but it has many users and seems the most experimental. I was not as fond of the open-source, Stable Diffusion, but it has many tools attached to it, so I kept investigating its capability.

For this exploration, I set several goals:

Then I started learning and experimenting.

The Ai is using algorithms and scanning for images that match the text prompt, then uses predefined artistic methods, it is compositing and enhances an image to meet the expectation of the user. Learning its language yields the best results.

In one instance, I used the description “angel,” and I think at one point, I added “dark.” It generated a nude woman, which I fed back into the generator (hoping it would add clothing), and it said I was creating offensive content. Ha! I spent some time learning about the business aspects of it – how it relates to our industry still seems to be in question. 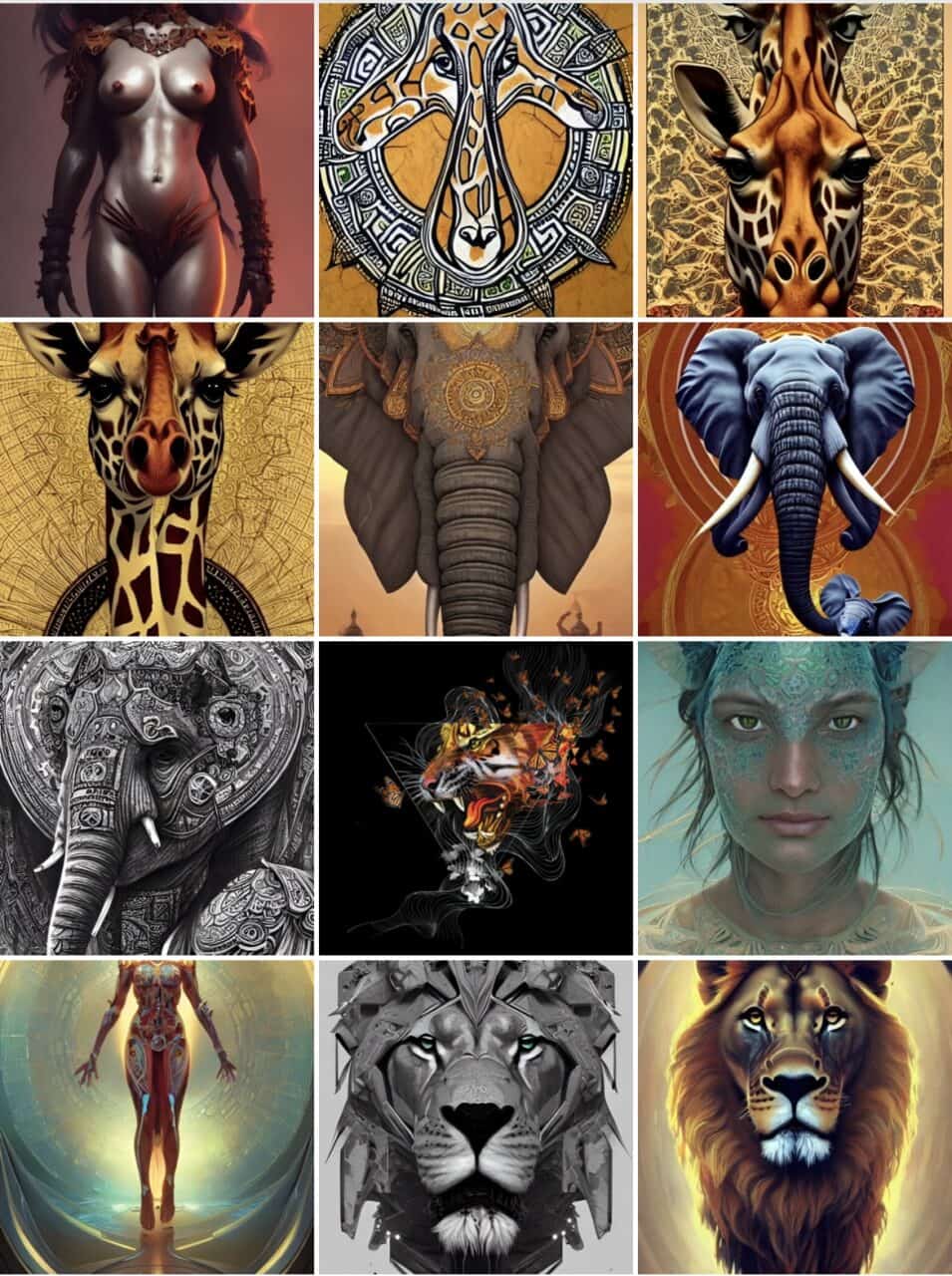 Milosj De Groot of Mad Specials said, “It can be easy art if you do not know how to paint, but sad for the artists who put in the work.”

Van Han from Sydney, Australia, ” If someone can incorporate this with an online designer for DTG fulfillment model, it will make a killing. “

Eric Solomon from Night Owls in Houston, TX “I think the concept of AI-generated art is really interesting, and the things I’ve tried to use it for were for complex projects I couldn’t find a specific artist for.’

Dan Campbell of Dot-Tone Designs says, “I see it being beneficial for an art department when creating something (blue sky) for an online business. Generating random “cool looking” designs in short runs such as for DTG or DTF. It is a good low-cost art source for unique designs in that arena.”

I also spent some time learning about the deep fake protections coming online. That was a rabbit hole of its own. MIT has created some scatter programs that would protect images from the generators. Unfortunately, once the generator is more intelligent than the protection, it would disappear – so it may remain relevant only while the image is relevant. Conversely, the generator programs would have to adopt this tech to be genuinely effective. With Ai, Licenses and Copyright will get a lot more complicated.

I’ve been looking for Ai generated images out in the world and have started recognizing them in a few places. I see memes with it now frequently. Many are doing what I am attempting to do here – an exploration. For example, one person used images of older famous figures to recreate them as current (Christopher Columbus example). Morgan Freeman’s Twitter featured another artist who created a portrait of him. (example). It has people talking in our industry; even a podcast I was listening to about insects saving the planet mentioned it. The context was interesting; when we consider the future, we must consider the planet and people. Have we done that when creating this Ai? 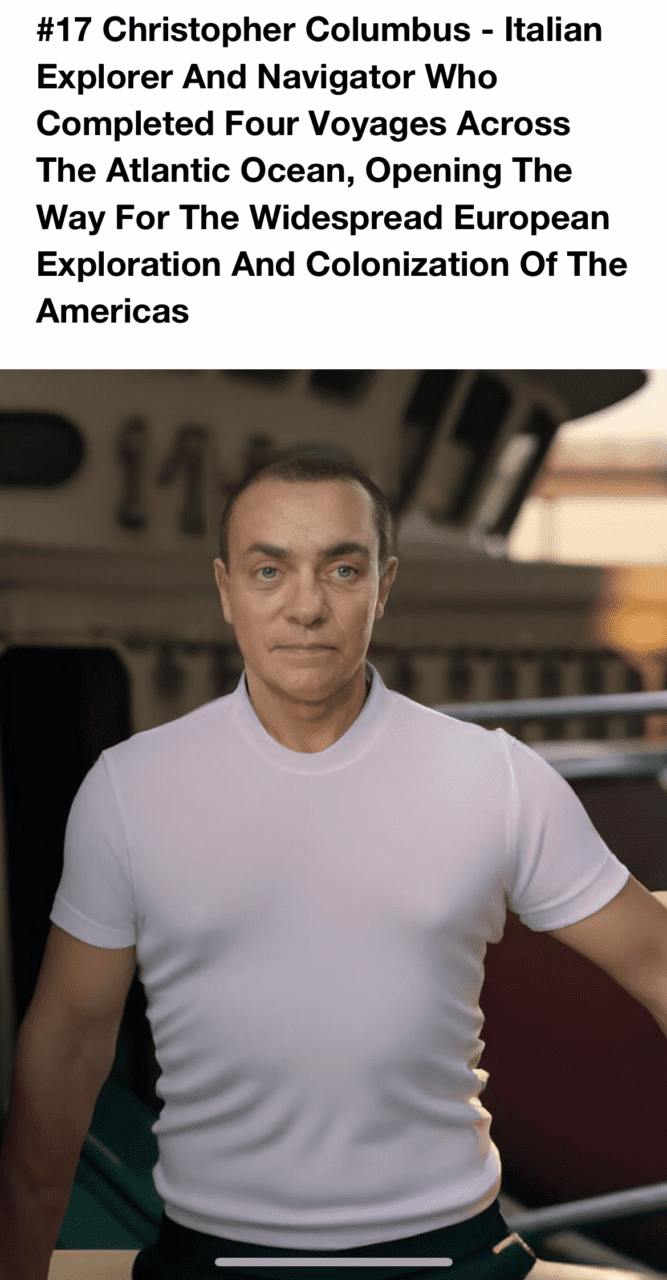 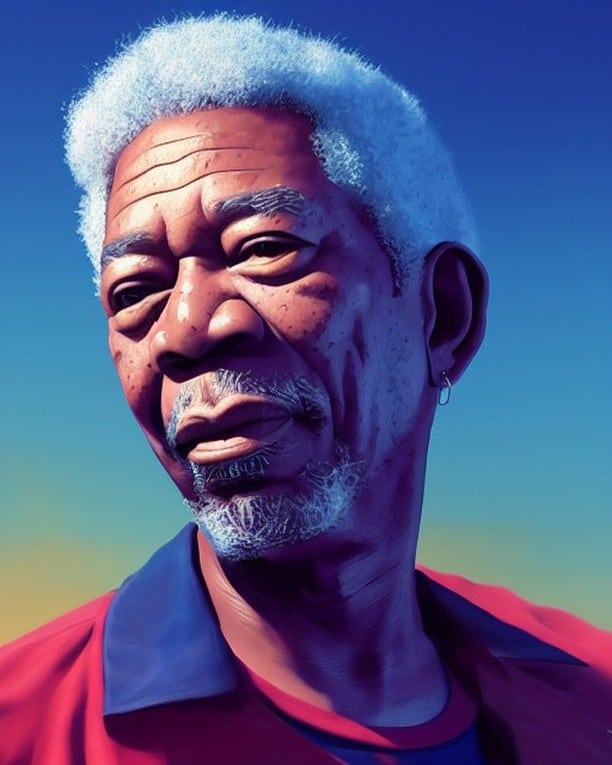 Ai generators are advancing – quickly. MidJourney can combine two images into one; when I started 30 days ago, it couldn’t. Tome introduced DALL-E into its slide presentation format to introduce a much more intriguing presentation in the conference room. Traditional Powerpoint slides could go the way of the dinosaur, and good riddance. Stable Diffusion 2 is another advancement, that I just started to test and was changing my opinion about Stable Diffusion.

There were a few things to like about it: experimentation, ease of use, and possibly another creative tool. There are also things to dislike. It is currently stylized, adequate images take forever to generate, and it can be costly. Some even bigger questions trigger in our minds making it easy to dislike.

Dan Cambell says, ” If you are looking to stylize your photos or create unique images of yourself in a futuristic world or even a renaissance world, it’s a pretty cool source. Those results may be much faster, but when trying to obtain a specific look and content, it’s greatly lacking. As many of us would experience in a real-life business scenario for creative customization, I found myself with an immediate need just the other day and tried to utilize a platform to come up with a final file or even something to be used partially as inspiration but failed. The results brought only frustration and a tighter timeline. So (for our typical use), I find it very cumbersome currently. I’m sure it will get better as it grows.”

Next, I began pushing the generators into something I would like. In the beginning, like Dan, with little success. The first image I explored – the giraffe, was an exploration of what I could ask it to do from two perspectives: a photo of a giraffe and ‘deconstruction.’ 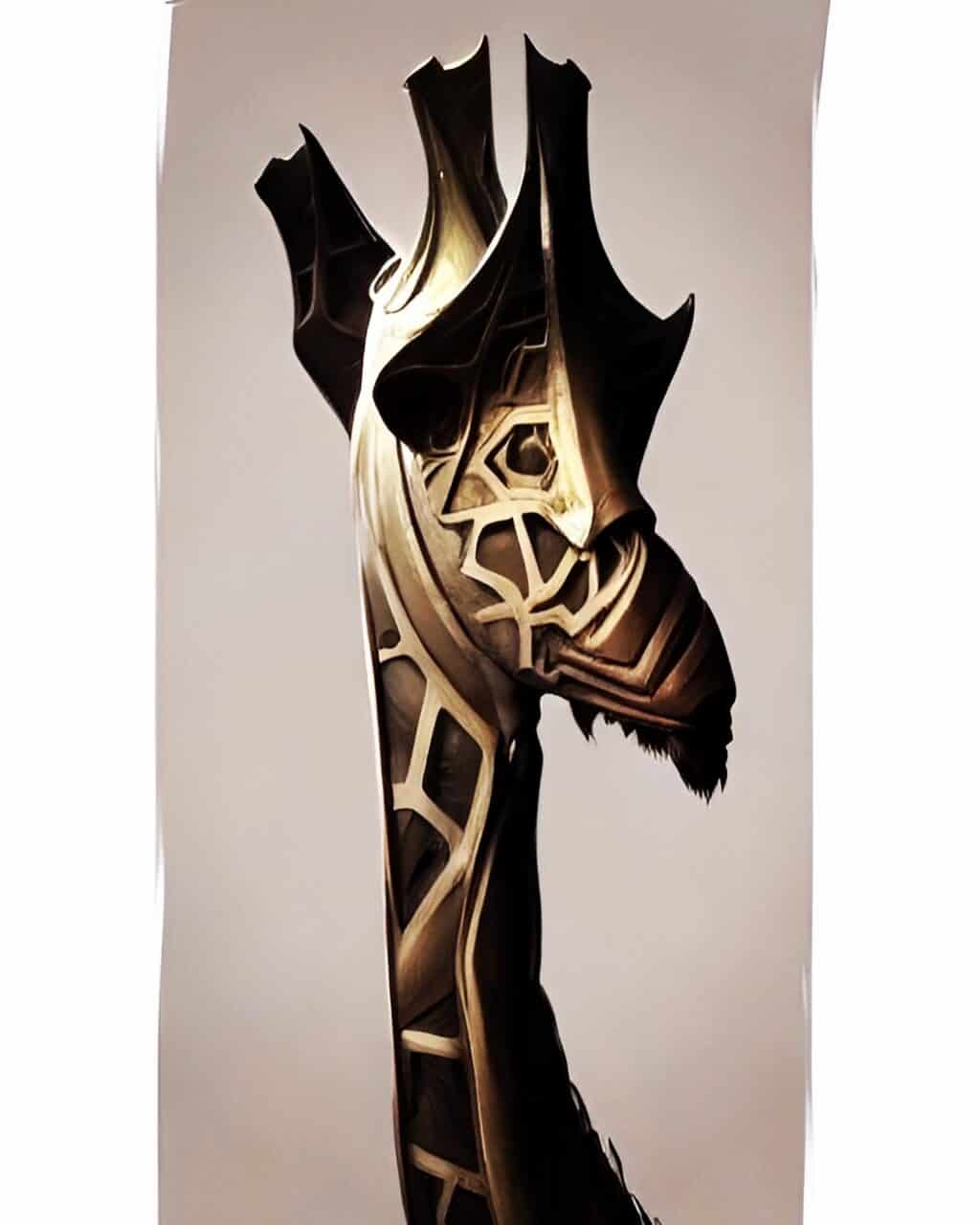 It did very well, yet it is very stylized. Being so stylized is one of its limitations. Even when you ask it to adjust to a new style, it still is a distinct version of that style. It is recognizable. That may also be one of its positives, knowing it is still Ai, not crossing over into that area where it eliminates – well, me. Although with photographs, this line is more blurred.

Hundreds of images later, I decided on another project, the fox,

I am trying to use AI as a more intelligent “clip art.”

Something I could envision myself using for business and expansion.

I used it to develop an initial concept. “Fox Flower Abstract” 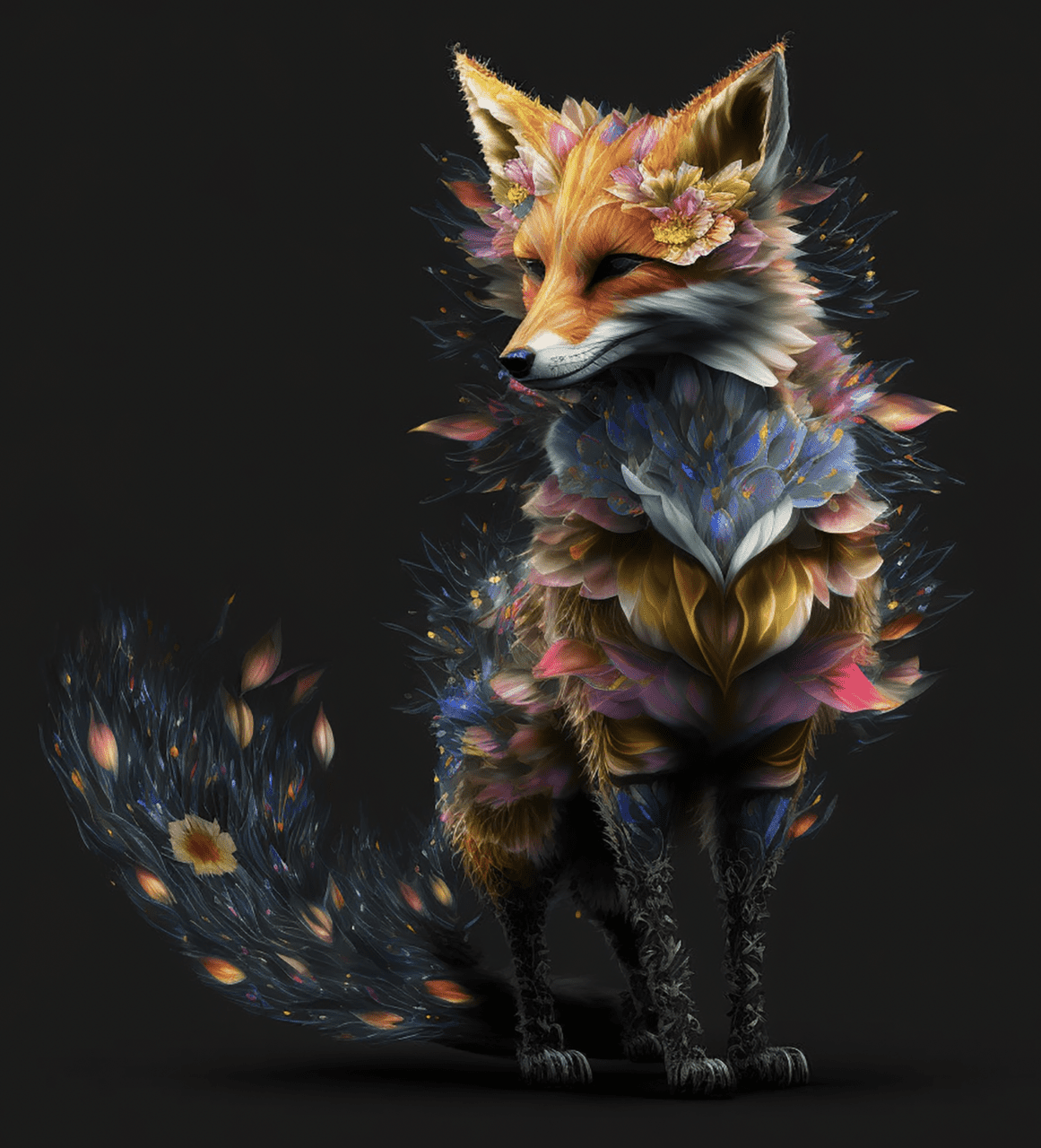 It took another 40 or so generations to find one I liked. Cost like this is where it could become overwhelming. Even employing a single artist can feed future projects, this is limiting to finding something that works now.

Eric Solomon say, “You have to be hyper-specific with what you’re wanting instead of chatting and changing with an artist who is interpreting your vision through their filter.”

Dan Campbell says, “When you put in keywords or phrases describing a specific need or even upload image sources, I don’t see the results as being on point enough, without a lot of variation after variation to come close to something you “might” use.”

Pam from Ink Kitchen offers, “And sometimes it just misses the mark completely- a capybara in a sweater is not a dog in a beret!”

Next, I repainted the fox to break it from that stylized generator appearance. 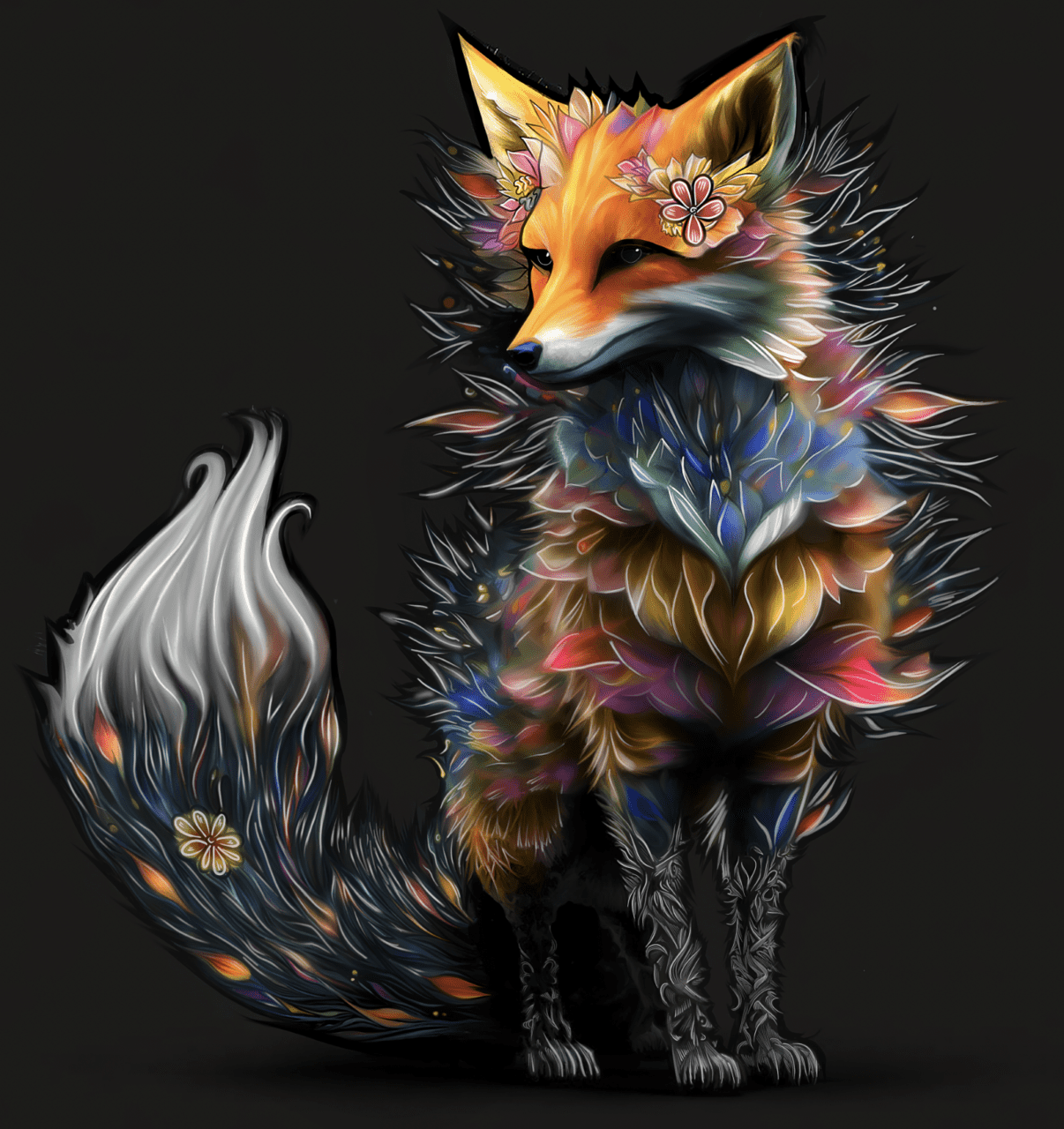 The funny part is that the initial comments I received early on were that the areas I painted weren’t as “good” because they were stylized like a cartoon. I find this very amusing. I think the generator had created something aesthetically appealing but also “canned.”

Milosj De Groot of Mad Specials says, ” Everybody can make art… Art comes from the soul… not from a machine.”

I was delighted with the final fox at the end of my investigation. I posted it into one of my art groups with just the title “WIP” and received thousands of likes almost immediately and hundreds of encouraging comments and praise. I did not describe to the group the exploration, the media, the process, or my intent to produce t-shirts. Although at one point, I did disclose the latter in response to a request to purchase an NFT. Begging a new question, if Ai generated it, can it generate an income? If we make t-shirts, there is a physical product, and in this project, I want to site MidJourney. But what if it is purely digital? Will Ai create a new kind of “artist” savvier with creating an accurate description than an actual piece of expression? What if Ai to NFT becomes a thing? A commodity of artistry is NOT something we should collectively rubberneck and watch happen. Large brands commoditized beer until it got more and more like water with chemicals, people finally said, this is crap, and now we have craft brews.

At one point during the month, I discovered a nail artist that created an illustration nail technique that was so intriguing MOST commentators thought it was fake. I did at first, too. I dug more deeply and found a tutorial and saw her technique was real and very well developed. @fauxjacat It was all about the process of creating that revealed the truth, which is where I love art the most. This intrigued me because it was almost the opposite of the Ai generator. 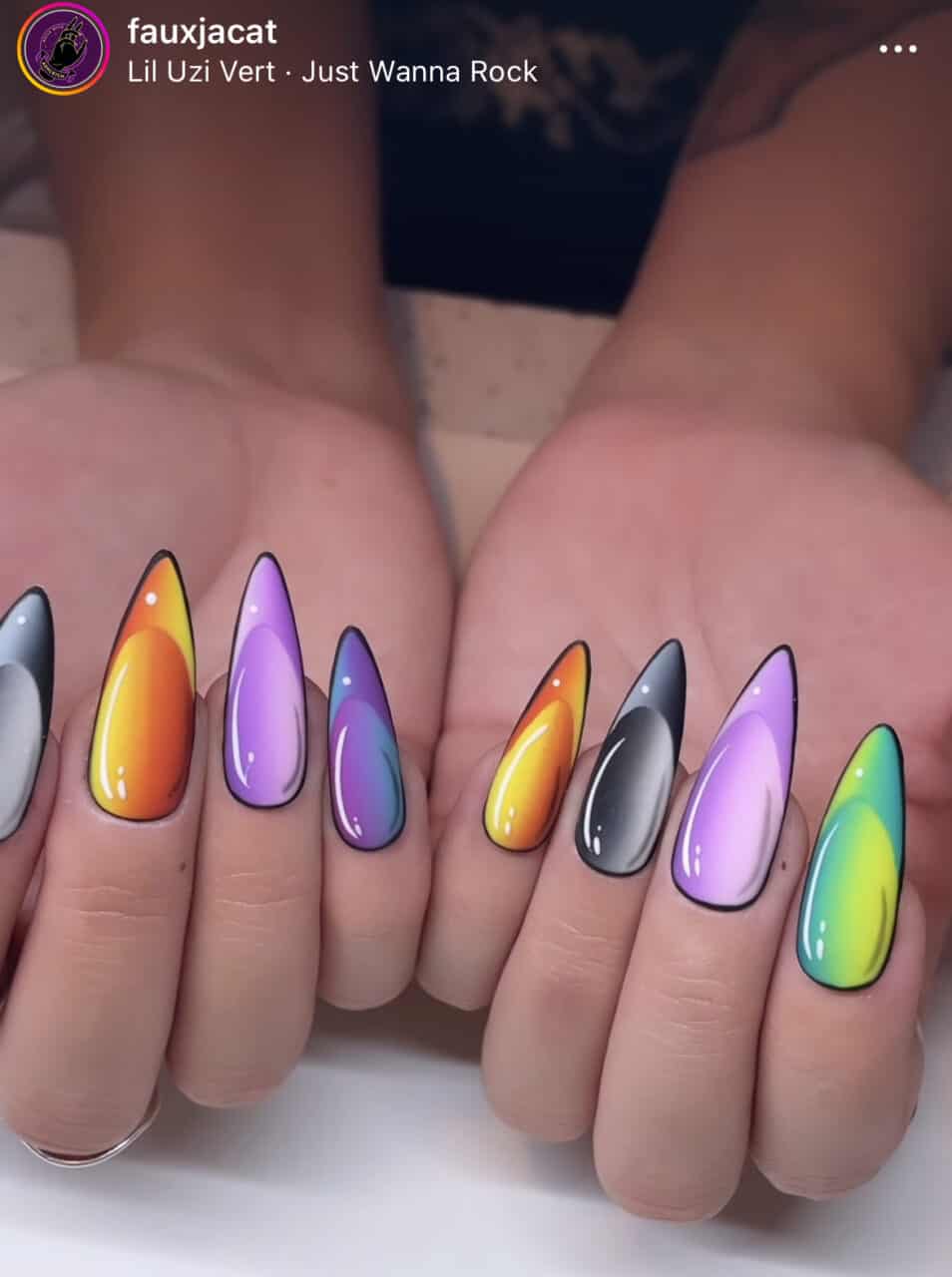 Dave Gardner from Gildan says (in true Dave Gardner style), “If you take the human out of ‘human being,’ all you have is being”

Dan Campbell offers, ” As AI generators grow, I’m saddened. I’m sure I’m saddened like many were 30 or 40 years ago. The people from long ago might have enjoyed writing and were proud of their penmanship, or those who enjoyed the efforts put forth in typing out a book on an old typewriter—all to be replaced by computers, pdf files, and smartphone text messages.

When I graduated from art school with a focus on Illustration, it was the same time when computers came to a home near you. It was only a short time after that the Illustration trade changed drastically. An Illustrator once did an illustration for a magazine and earned $3-$5,000.00 or even $10,000 in some cases for one painting. It wasn’t long before the illustration business evolved into online sales of images used for $50.00 and now down to $1.00 per download, and you hope you do something that people like that will get you 10,000 downloads. …. Nobody will be left who knows how to paint or draw literally. There will be no need for creativity which can be done for you with a few choice keywords, and that saddens me. Times stand still for no artist. Conform or be left behind.”

I found I spent less time on the fox than if I had generated it entirely myself. Typically tee shirt art that I create is a 40-hour project. This was more like 25 AFTER I found an image I liked. I did the generations while watching tv, waiting for something, or at lunch, not on the clock. I am printing this on a digital press, not a screenprint or hybrid. Typically, I include separations in that 40 hours. So maybe we eliminated half the time, but did we eliminate half the artistry? Hand painted and hand screened signs could be beautiful in a way that digital signs cannot (and certainly were not at the beginning).

And if you did not learn how it was created or printed, would you care?

Check back for article #2 Ai exploration